I have reached the size that people feel that they can ask, comment, and offer advice on pregnancy, how miserable I must be and I'm sure how horrible child birth is going to be.  Two people commented yesterday at the supermarket, one was nice asking about how much the baby was kicking and saying that her baby kept the same awake hours after they where born. The other woman said that I must be enjoying the heat.

Lots of people have been asking boy or girl and apparently not finding out is a brave thing to do becuase that is what most of them say when I say that we aren't going to find out early.

It is interesting watching how people interact with pregnancy
at 9:48 AM No comments: 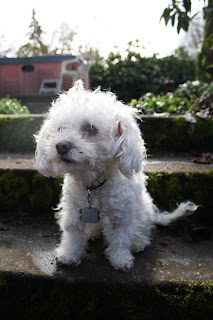 There are just 102 days left till our due date. Kinda crazy to think that it started at 280 days which means that I've been pregnant for 180 days or so. Other than being hot and tired and missing sleeping I am doing good. Baby is good and has been moving pretty consistently everyday for long stretches of time,


Baby seems to like kicking (petting?) Roxy when she gets up on my lap. Roxy isn't so into the whole thing she just sighs and looks at me like, isn't it enough that you are running out of lap room for me to sleep on and now I have to get kicked.
at 1:05 PM No comments:

Carlie Regina
Solo mama with a son C who was born in October 2011 and daughter L who was born in February 2014 . I love being a mom, I feel lucky to get to spend my days building forts, reading books and taking walks and watching my kids grow up into amazing little people and getting to homeschool them this year.

I'm Carlie. I live in Northern Idaho with my amazing husband Rob, in a great house that we are remodeling, with our poodles Roxy and Romey, and our two year old son C. I'm due in February 2014. In 2010 I miscarried at 17 weeks and we lost a son, writing about that grief and my pregnancy with C afterward is really was started this blog. I am stay at home mom by day artist by night, I also blog at crunchymoms.com and run a WAHM business Roxy Roodle. This blog is about crafty DIY, sagas in remodeling, urban homesteading, Cooking Real food from scratch while coping with multiple food allergies and Celiac: and adventures in natural parenting parenthood.