I've been hearing a lot about elderberry syrup and how a spoonful of the stuff taken everyday drastically reduces your probability of getting a cold. With a two year-old in the house (we all know what germ magnets they are) and being pregnant this winter I don't want to get sick, my husband can't afford to get sick (hes saving up his sick time for when the baby is here) Anything that might help us avoid getting sick sounds like a good idea. The stuff is supposed to taste good too, and it can't hurt to try it. Which is my philosophy on most things crunchy. The only thing standing in our way was the cost of a bottle of this magic stuff at 20 dollars for a 16 oz bottle there was no way we where buying it. Which left good old make it yourself.  Finally I got around to ordering a pound of organic elderberries off Amazon which was around 20 dollars including the shipping. The recipes online looked pretty strait forward with the same basic ratio of water to berries and honey the herbs and spices differed depending on who wrote the recipe. So I didn't follow them exactly 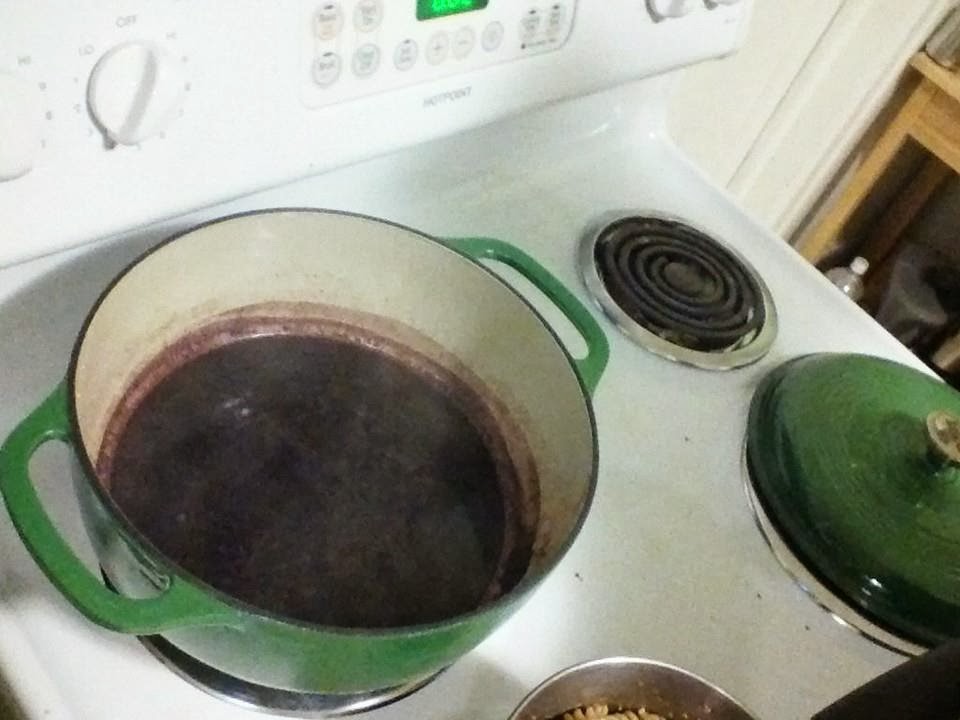 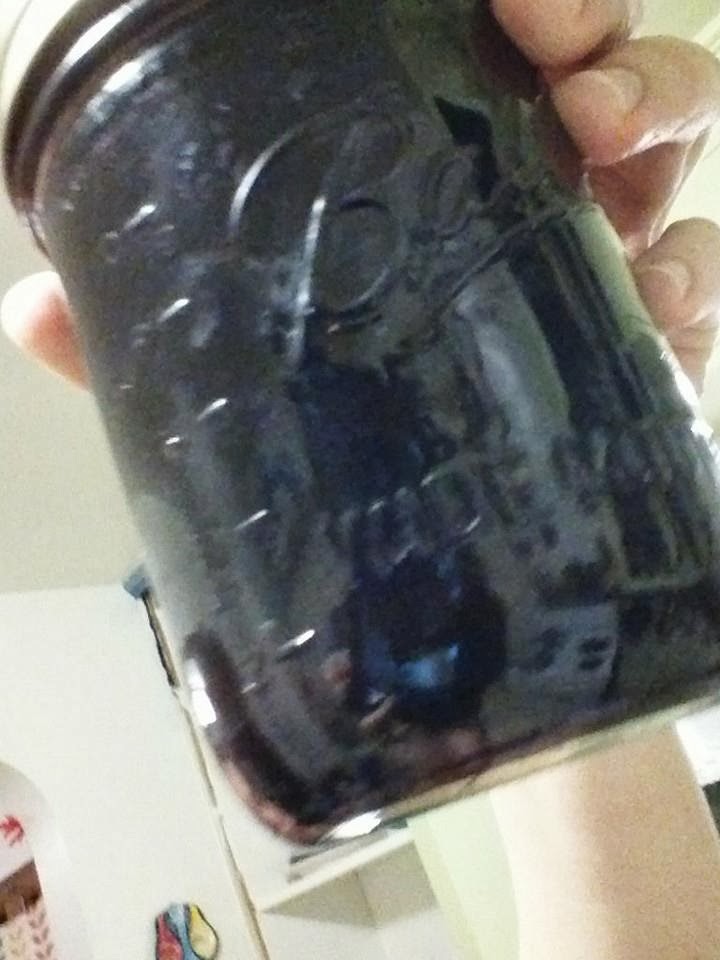 Boil 3/4 cup of berries in 3 1/2 cups of distilled water along with whatever herbs or spices you wanted to add in to boost the germ fighting goodness. I threw an organic echinacea tea bag, some ground fresh ginger (about 3 teaspoons), and some cinnamon (a tablespoon maybe) Let the brew simmer for 45 minutes to an hour till it as reduced by about half the amount of liquid. Then strain the mixture into a glass bowl through a fine mesh sieve mash the berries to get all the juice out and then discard them. The brilliant purple juice should be about 16 oz worth give our take.  Let it cool a bit then add in a 1/2 to a full cup of local raw honey. I added a half cup after hearing from a friend that a full cup (what most recipes call for) was way way to sweet. stir the honey around let it devolve and pour the syrup into a jar. You can take up to a tablespoon a day to keep sickness away, or a few tablespoons if your sick. Kids under a year or two should not take this since it has raw honey but if you have older kids they can take a 1/2 to a full tablespoon.    C thought it was really yummy and asked for more medicine after licking every last drop off his spoon so I don't foresee and issue getting him to take it everyday. I have to agree with him it was pretty yummy. Hopefully it works and we won't get as many runny noses and colds this season. I'll let you know how it seems to be working as the winter progresses.
at 11:27 PM

Carlie Regina
Solo mama with a son C who was born in October 2011 and daughter L who was born in February 2014 . I love being a mom, I feel lucky to get to spend my days building forts, reading books and taking walks and watching my kids grow up into amazing little people and getting to homeschool them this year.

I'm Carlie. I live in Northern Idaho with my amazing husband Rob, in a great house that we are remodeling, with our poodles Roxy and Romey, and our two year old son C. I'm due in February 2014. In 2010 I miscarried at 17 weeks and we lost a son, writing about that grief and my pregnancy with C afterward is really was started this blog. I am stay at home mom by day artist by night, I also blog at crunchymoms.com and run a WAHM business Roxy Roodle. This blog is about crafty DIY, sagas in remodeling, urban homesteading, Cooking Real food from scratch while coping with multiple food allergies and Celiac: and adventures in natural parenting parenthood.